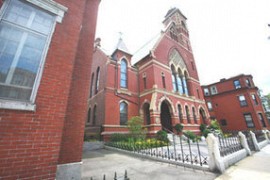 The first known Orthodox Albanians arrived in the United States late in the nineteenth century, settling in the northeast part of the country. By the first decade of the twentieth century, Albanian immigrants began to form fraternal societies and then publish newspapers in the Albanian language, notably the newspaper Kombi (The World) in 1906 and the Dielli (The Sun) in 1907. It was the death of a young Albanian man that provided the spark for the formation of an Albanian Orthodox diocese in the United States.

When deaths in their community occurred, the Albanians sometimes had to journey to a Syrian Orthodox priest in Lowell, Massachusetts, a great distance for many of them, as Greek Orthodox churches in the local areas sometimes would not perform funerals for those considered nationalist extremists. The death of the young man, Kristaq Dishnica, spurred the community toward forming their own church in New England. As their leader, the community picked Fan Noli. As there wasn’t any Albanian clergy, Noli decided that God was calling him and he petitioned Abp. Platon of the Russian Mission to ordain him to the priesthood to serve the Albanian community. With Abp. Platon’s consent, Fan Noli was ordained on March 18, 1908, after receiving monastic tonsure with his birth name name Theophan.

Fr. Noli, having already prepared an Albanian translation of the Liturgy, served his first liturgy in Albanian on March 22, 1908 in Boston, Massachusetts. While Albania had been in the sphere of the Byzantine empire, the official liturgical language was Greek, although many services such as baptisms and funerals were conducted in Albanian. Later, under the Ottoman Turks, the teaching of the Albanian language in schools was not allowed by the government. The liturgy in Boston thus became a cornerstone of an Albanian renaissance. Ten years later, the Albanian Orthodox community had grown, so that Bp. Alexander, the ruling bishop of the Russian Mission, raised Fr. Noli to the rank of mitred archimandrite and appointed him on March 24, 1918 administrator of the Albanian Orthodox Mission in America.

Fr. Noli took an active part in obtaining world political interest for an independent Albania including Albania’s recognition by the League of Nations. Active in the affairs of the independent nation of Albania, he left the United States in the early 1920s. In Albania, Fr. Noli was consecrated bishop and named to lead the newly-declared Orthodox Church of Albania, as the Metropolitan of Durres. Also active politically, Metr. Noli was appointed Foreign Minister of the Albania.

In the United States he led in discussions with Metr. Leonty of the Metropolia on the need for a single Orthodox jurisdiction in America. It was left, however, to his successor to fulfill the idea of joining into a single jurisdiction. After Metr. Noli’s death on March 13, 1965, without a diocesan nomination, Fr. Stephen Lasko was consecrated bishop for the Albanian diocese by the Synod of the Church of Albania.  On October 14, 1971, Bp. Stephen led most of the Albanian parishes into the OCA.

The former Fr. Nicholas Liolin was consecrated Bishop Nikon of Baltimore, an auxiliary bishop, as administrator of the Albanian diocese on May 25, 2002. Bishop Nikon, upon nomination by the archdiocesan assembly, was elected by the Synod of Bishops of the OCA as Bishop of Boston and the Albanian Archdiocese on October 22, 2003. In October 2005, he was also elected by the Holy Synod as the ruling bishop of the Diocese of New England (see of Hartford) and was installed on December 17, 2005 with the new title of Bishop of Boston, New England and the Albanian Archdiocese. He was later elevated to the rank of Archbishop.

Archbishop Nikon reposed in the Lord on September 1, 2019. Metropolitan Tikhon is currently the Locum Tenens of the Archdiocese. 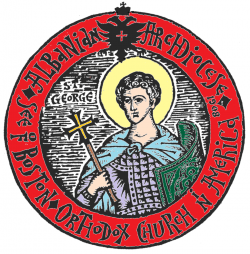